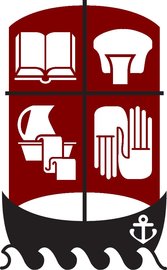 The logo of the Free Will Baptists incorporates four symbols used by the earliest communities in Christendom: the ship, the fish, the anchor, and the cross.

In the four corners of the ship’s sail, the symbols of earliest Christianity are enhanced by modern emblems of a vital, living faith—the Holy Bible, the Loaf and Cup, the Basin and Towel and Clasped Hands —the symbols of Free Will Baptists.

The Ship symbolizes the Church and represents all the members pulling in one direction, guided and empowered by the Holy Spirit. Seeking to fulfill Christ’s last command to the Church, Free Will Baptists unite in one purpose with one priority to proclaim the good news of the gospel throughout the world.

The Fish, represented in the symbol by the space between the bottom of the sail and the top of the ship’s body, is one of the most popular symbols for Jesus Christ. Many believe that it was a secret symbol which identified Christians during periods of persecution. The word “fish” in the first century Greek (ichthus) is an acrostic for Jesus Christ, Son of God, Savior.

The Anchor on the bow of the ship symbolizes the Christian hope of salvation, “the sure, strong and steadfast anchor of the soul.”The Cross forms the emblem in the mast of the ship. It is the most familiar symbol in the history of the world. The Cross, an instrument of execution and death turned into a worldwide emblem of hope and love by the death and resurrection of Jesus Christ.

The Loaf and Cup represent the Lord’s supper, one of the gospel ordinances. This ordinance commemorates the death of Christ for our sins in the use of the bread which He made the emblem of His broken body and the cup the emblem of His shed blood. Participation in this ordinance expresses love for Christ, faith and hope in Him, and serves as a pledge of perpetual fidelity and faithfulness to Him.

The Basin and Towel historically symbolize the service and outreach of the church, but for us it has an added significance of representing our practice of washing the saints’ feet.

The Clasped Hands symbolize many things to us: fellowship, brotherhood and the warmth of our faith. Perhaps the most important thing symbolized by the clasped hands is our commitment to reach out to people around the world with the good news.
© Copyright Kansas State Association of Free Will Baptists. All Rights Reserved